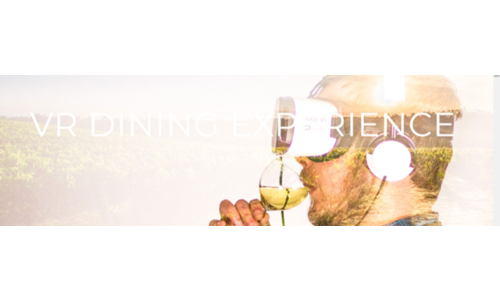 The emergence of VR in the world of sensory science has been evident for the past few years. Examples being the more frequent use of a virtual supermarket to conduct consumer research and our very own development of EyeQuestion VR which will make it possible to conduct virtual questionnaires.

VR Solutions, in collaboration with de Hogeschool van Amsterdam, Deli XL and VR Owl, has created a unique dinner experience called VR Dining. The event combines scientific research with a more casual night out to investigate the effect visual and sound impulses on taste perception. Precursor to the current influx VR based sensory research is Brochet & Dubourdieu’s wine tasting experiment, where white wine was coloured red to investigate the panel’s assessment in comparison to red wine. Another example is the Narumi’s Meta Cookie Experiment, where AR (Augmented Reality) was used to conduct research regarding taste influences in the form of a different flavor being projected on a cookie.

A description of an experiment you could do at home can be found in Jolijn de Heer’s post “Scientific Food Hacking” , where, based on an experiment done by Charles Spence, audio is used to manipulate taste.

Research done by the University of Utrecht regarding a more intense taste perception resulted in a VR concept that can be applied throughout the Netherlands in the form of VR Dining. The application of using VR is able to immerse guests with their food by placing the guest in the natural environment of the food they are consuming, creating a natural awareness of their meal. VR Dining provides a good night out, but there are also other useful experiments and treatments to be obtained by using this technology. Food sustainability would also be one of the benefits of VR food as algae and insects could be used for food intake on a widespread basis. Overall health can be improved to reduce overweightness as it can be utilized to make people eat less by associating certain foods to unpleasant memories and helping people with eating disorders by providing virtual therapy. Research regarding the use of VR to combat eating disorders has been present since the late 90’s, but technological advancements in the latest few years have caused VR to become an easy to use and affordable option to conduct widespread research on this subject.

Nimesha Ranasinghe from the University of Singapore that combining stimulation of smell, sight and taste could effectively alter the perceived taste of a participant when conducting tests using a digital lollipop. Subsequent research on the subject was done by creating the a virtual cocktail for pairing taste, smell and color sensations. During the VR symposium in Utrecht, held a few months ago, the benfits of using VR for therapeuthical instances was also displayed to create a better understanding for the patient’s environment.

The Dutch company Sensiks has created an even more immersive environment with their Sensory Reality Pod, in which audio-visual experiences are matched with scent, taste, light-frequencies as well as physical changes in the environment such as air-flow and trembling to hopefully give the user an experience that stimulates all senses. We are very excited to see what else is on the digital horizon and hope that EyeQuestion can be a part of it.