Want to win the future? You’ll need VR to do it 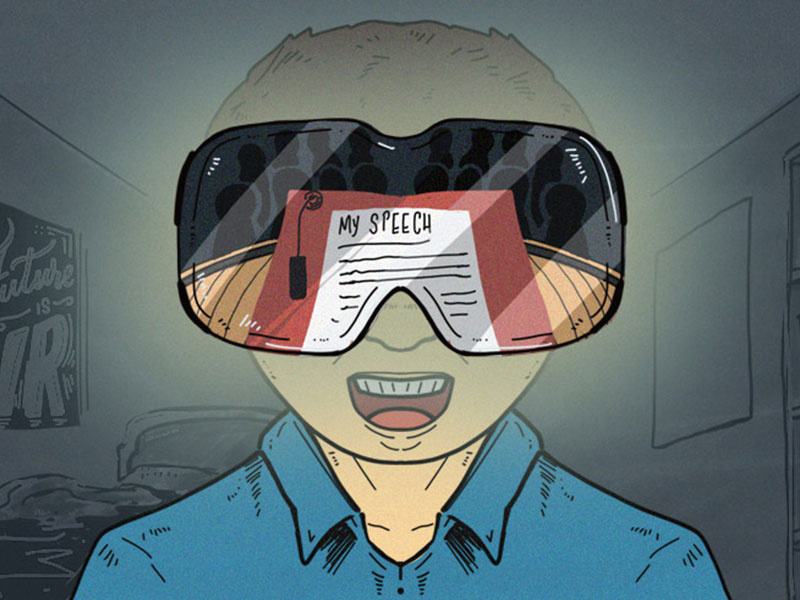 It’s the weekend of the conference that you had been dreading/dreaming of/losing sleep over/all of the above. It’s your first international speaking engagement, and you really, really don’t want to blow this. The spotlights immerse all but your first row of distinguished colleagues into darkness; their half-hearted applause and cross-armed reception is hardly the red carpet you were hoping for. But thankfully, Virtual Orator had prepared you for this, and your palms stay cool and dry, your heartbeat steady, as you confidently and systematically work through your prepared presentation line by line. From the opening line to the final comments, you are on point and a million miles from where you first put on those VR glasses, one month and countless prep hours ago.

Glossophobia, or speech anxiety, is not the only phobia that virtual reality (VR) is helping humans to overcome these days. Mixed reality applications are also proving highly effective as socio-psychological tools to cultivate empathy, understanding and healthy communication within the workplace, while giving employees new platforms for engagement in the collaborative design process.

Through ever-evolving science, virtual technology could help unlock new levels of human-centred design, based on healthy human collaboration. Whether it be eradicating stage fright, overcoming cubicle anxiety, or building a more empathetic C-suite culture, VR may just be the new ‘blueprint’ for businesses to take control of the future.

According to a study by the National Training Laboratory, VR is by far the most effective learning tool for the future. Retention rates via lecture-based training ranked at 5%; reading rates at 10%, but VR had a retention rate of 75%.

As common sense would tell us, there’s nothing quite like lived experience to transform head knowledge into gritty and reflexive intuition. Missions such as US2020 are even connecting underserved and underrepresented students with high quality STEM mentoring, through 360-degree videography and simulated experimentation. Now, previously disenfranchised children have access to unprecedented opportunities in a field critical to our 4th Industrial future.

But VR’s efficacy as a teaching tool is not only exceptional in transferring knowledge and skills within the workplace. It can also be an effective means to safeguard emotional pitfalls and bolster the human psyche. NASA has been using zero gravity simulation, in some form, since the 1950s as a way to hone the astronauts’ skills and character under crisis. Walmart has partnered with virtual trainer, Strivr, to help employees psychologically and logistically prepare for the annual mania of Black Friday.

And, with the ever-evolving nature of digital technology, the VR experience is about to get even more real as companies now work to go beyond the already mind-blowing audiovisual experience that VR has to offer. Sensiks has developed a sensory reality pod that provides a totally immersive VR experience, augmenting visuals from the headset with ‘full sensory symphonies’ comprising a set of exterior wind, light, and heat sense simulators. By stimulating all senses, the human brain will be activated on multiple points, enabling a highly realistic experience and provoking a ‘euphoric experience’, which can be helpful in education, training, and helping prevent burnout in the workplace.

"Real life reality is always full sensory and 360. Even a small cool breeze on the skin sets off the brain in ways you cannot even imagine," says Sensiks’ founder Fred Galstaun. "Within a closed, controlled environment where all the senses, including audiovisual, are made 360, there is no difference for the brain anymore between real and fake. It has become reality for the senses."

From isolation to shared experiences: the fear and future

While the virtual world enables us to visualise and be on the same page with colleagues who have experienced it as well, VR remains characterised by individual immersion. By taking us to a whole new dimension, it disconnects us with the real world and isolates us from creating face to face social interaction, which, by nature, is a human need. How will VR evolve to address the innate need of humans for connection, which is something that cannot be digitised?

“In spite of the emergent state of the medium, the future of VR seems to be social,” says Josefina Buschmann, a documentary filmmaker and researcher at MIT’s Open Documentary Lab. In this year’s Sundance Film Festival, animation and documentary projects at the New Frontier’s section enabled groups of participants to connect and interact in virtual environments and let them fully experience a story together.

“VR is starting to leave its isolation state and transitioning to a communication tool that could be embedded in our daily lives in a not so distant future,” she adds.

However, if and when VR fully becomes a platform for social interaction, its advantage to let us engage in the virtual environment could ironically be one of its pitfalls. “The sins of the internet have the ability to be amplified in VR in a terrible, terrible way,” says VR expert and author Peter Rubin.

While it hasn’t happened yet, Rubin believes that online phenomena such as fraud and catfishing will happen in ways that could be potentially more harmful than what’s already happening in the social media world. Without regulation, anyone can impersonate people we know and appear on a multi-user space to gain our trust and valuable personal information.

“Whether it’s a regulatory approach or something that’s explicitly legislated against, I’m not sure what the solution is. But we need to get out in front of this before it becomes a real problem,” he adds.

Ultimately, VR can provide a powerful experience in which human behaviour and presuppositions can be challenged. Chris Milk, founder and CEO of Within, refers to virtual reality as the “ultimate empathy machine” that can cultivate compassion, close cultural gaps and inspire individuals to act for change.

Says FEMA’s Stephanie Moffet, “Research is showing that VR can be a powerful tool for impacting people’s perceptions and actions in the real world. Whether it be the cow you typically consume, the coral your feet may carelessly break, or the homeless man you overlook on the street, immersive experiences can nurture authentic compassion and bring light to issues previously obscured.”

And, as VR slowly gets closer to affecting and influencing our behaviours, could it also be the ‘antidote’ we need to help individuals tackle and ‘cure’ their greatest fears? One study shows that VR has successfully been used to help people overcome their fear of heights. Just imagine when virtual skydiving and bungee jumping experiences can further help in treating this phobia. Or better still, just imagine when VR technology reaches that breakthrough enabling it to help us beyond our phobias and fears, and offer invaluable supplementary treatment for other mental health problems. The possibilities to advance humankind, if we’re able to reduce our innate fears, are endless.

Make no doubt about it: VR is coming to an office near you. With a 200% projected growth rate over the next three years, it’s a stunning case of being virtually unstoppable. Companies who choose now to jump on board and prioritise its applications are those who will ride out ahead of the competition.

Aurecon’s award-winning blog, Just Imagine provides a glimpse into the future for curious readers, exploring ideas that are probable, possible and for the imagination. This post originally appeared on Aurecon’s Just Imagine blog. Get access to the latest blog posts as soon as they are published by subscribing to the blog.